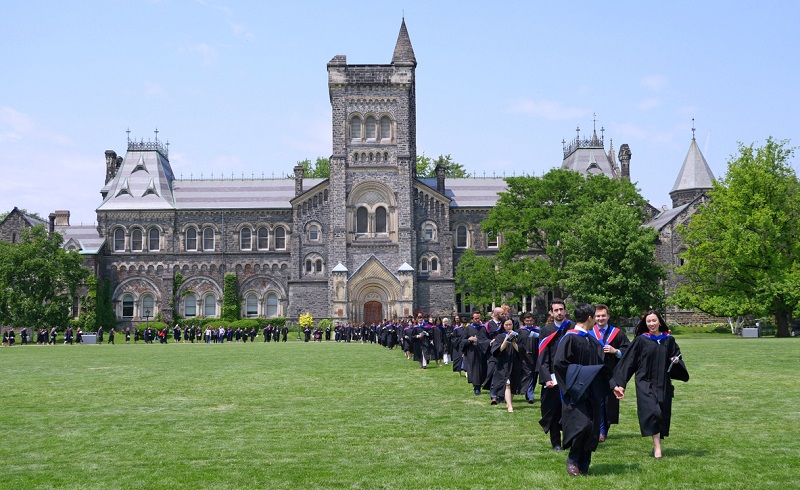 Though Canada is highly preferred amongst other Nations when it comes to fulfilling one’s study abroad dream yet all the locations in Canada are not equally preferred when it comes to the choice of students inside the North American Country. The6,42,000 students flocking every year towards Canada from their home country favour 3 major provinces (British Columbia, Ontario and Quebec) over the 10 provinces and 3 territories of the nation. In the recent Numbers Canada is reported to host 97 Universities offering world class education and hardly any of these is without International students. International Students program their choice of university based on a number of factors ranging from the placements, immigration requirements to the international fraternity present already there.

Not taking much of your time here’s a quick catalog of Top Canadian Universities according to the preferences of The Foreign Student Diaspora.

31% of the Enrollment done in the university was of International students according to the statistics of Maclean’s in the year 2016. University of British Columbia is a public research university in Vancouver and is the oldest university in the Province. The factors favoring the University’s success are the Province’s great weather conditions and easy immigration laws in comparison with other ones in the country. The University proudly affiliates 8 Nobel Laureates and 75 Olympians. Amongst other points the picturesque campus of the university is also amongst the inviting reasons for the international community.

The 1908 university has proudly hosted the simplest admission systems admitting foreign students for a long time now and this has really eased the processes which were otherwise cumbersome for the students.

McGill University is yet another highly chosen Public Research University of Canada situated with its main campus on the Elevated Hilly sides of Montreal City in the French Province of the Country. The enrollments for international students as against the domestic ones stand at 30.7% in the statistics for the leap year of 2016. The
University derives its name from James McGill, a merchant on whose estate the University is built. Established in 1821 by Scottish royal charter, the University is one of the medieval marvels.

The University is situated in the French Speaking Province which offers some very unique incentives to persons willing to welcome their culture in Jobs and Immigration. Although the University is an English Language University with only 2 such other universities in the province. McGill University also holds the record for being one of the best Higher education institutions in Canada ranking 31st on the QS World University Rankings. The university also boasts of 12 Nobel Prize winners and proudly hosts citizens from over 150 countries of the world. Though a hard nut to crack (acceptance slightly less than 50%), the university will be an experience forever for you.

Bishop’s University is a primarily undergraduate university with liberal arts being the most popular discipline. Founded in 1843 as Bishop’s College, this relatively small university situated in Quebec offers the best vintage feel possible. The first principal of this University was the Bishop of Quebec giving the university an obvious
appellation. The enrollment ratio for international students in this university is 29.6% according to the already discussed statistics. A comparatively less in numbers university, Bishop’s University offers the students a great chance to succeed in their future immigration processes.

A name echoing in the ears of every study in Canada aspirant, University of Toronto is the best ranking Canadian University on Ranking charts with 22nd Rank in the latest 2021 evaluations. Situated in the heart of Ontario Province the university not only provides perfect study opportunities but also fills your success with ample jobs waiting for you both during and after your study. With 12 Nobel laureates and 94 Rhodes Scholars this University is the perfect definition of an ideal public research university. A total of about 65000 students are enrolled with this university across an array of disciplines. The academic staff of the university is close to 3300 and this makes it impressive on the ratios when compared to other universities. The city of Toronto often referred to as the hub of immigrants offers a very welcoming feel to the international students especially to the Indians who migrate in large numbers to study and work in Toronto. If you are bright enough to make it to the varsity, BE THERE you’ll bless us for the advice too.

This University operates from the capital city of Alberta Province, Edmonton. Montreal, Ontario and British Columbia being overly crowded with Indians and other International Communities, Alberta is fast gaining the preferences of the newcomers both from the immigrants side and the country’s side too. Also this province lures students with the best immigration incentives possible. Due to the great income of students, jobs here are fast growing too. This 1908 University is situated in Urban area and infrastructures itself on metropolitan buildings. Also Easy access through public transports is available that might save you a lot of dollars in your whole course. A total of over 30 K students were reported studying in the university recently. The Law Centre and Business school of the University of Alberta are quite famous options amongst the international students.

Yet another Public University in the Ontario Province. This Waterloo situated University is quite a popular option amongst students who can’t easily make to top ones, however it is to be mentioned that this University is NO LESS. Beautiful Buildings, Green patches of Grass and Enterprising students are the usual characteristics of this University. Around 45 Thousand students make their careers concrete in this 450 hectares of campus every year. University of Waterloo is also fast gaining the limelight of study abroad aspirants, specifically Indians.

Situated in The Financial Capital of Canada, Toronto, York University is the 3rd largest university in Canada and one of the greatest preferences of Foreign Students. The University pridely hosts around 3,25,000 alumni across the world. This university is a comparatively new one with first campus establishment in 1959. Out of The 55,700 students studying in the York University, 7000 come from across the international borders. The university has a lot of Research Faculties possessing world class Research Facilities. York University has quite an optimistic acceptance rate of 80+% and an impressive percentage of placements i.e. 93%, these figures make the University a must on every International student aspirants’ list. The sessions begin all round the year in summer, winter and fall; hence whatever may be the passing date of your Current course you could easily apply for this University and leave within a span of 2-3 months.

Fingers Crossed, hope the list helped you in some way or the other! For any kind of further assistance and support, reach out to the office of Panache Immigration Today! @3rd Floor Vasal Mall, Police Lines